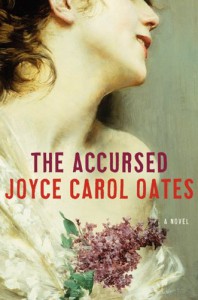 When the reader of this audio uttered the last word, I breathed a sigh of relief. I listened from beginning to end, but it was a chore. There were just too many characters, too many different scenarios that seemed to jump around without any rhyme or reason, too many conflicting ideas and themes coming at me, so that I just could not keep track of it all and enjoy the story. Perhaps, if it were not an audio book, I could have looked back more easily, but even with listening to sections, over and over, it just did not come together.
The narrator is the son of Horace Burr. He is telling the story of a curse that befell the Reverend Winslow Slade’s family from approximately 1905-1906. He has discovered this story by cracking the code of the chronicles written by Adelaide Burr, who was brutally murdered by her husband, Horace.
Many famous people are mentioned in the narrative: Woodrow Wilson, Grover Cleveland, Jack London, Upton Sinclair, Carnegie, Clements, and so many more. I was constantly wondering which part of this story was fact and which was fiction. Which character traits attributed to these people were real and which were fantasy.
The story begins in Princeton, New Jersey, in the early 1900’s, with the revelation to Woodrow Wilson by his mentor, Yeager, of the lynching of an innocent man and his sister. Yeager wants Wilson to do something about it, but Wilson, like most of those in power, turns a blind eye to the events because of the negative effect his attention to it, would have on his future as President of Princeton University. He is currently engaged in a power struggle with Andrew West, for control of the institution.
As the story continues, that thread seems to disappear without being fully developed except to indicate the hypocrisy of the times, and instead we are introduced to the presence of a possible demon, in Princeton, who is responsible for murder and mayhem as he assumes many incarnations. After several horrific incidents, it is assumed that there is a curse on the area. It seems to begin on the day of the Reverend Slade’s granddaughter’s wedding. Immediately after she is betrothed, she disappears with what is presumed to be a demon. The story concludes with the experiences of the Reverend’s grandson Todd which further reinforces the notion of a curse, perhaps upon that family.
The book left me wondering, was Oates mocking religion and G-d? Was this a satire? Was she declaring that G-d wanted the Reverend to successfully cause chaos in the world? Was G-d punishing innocent people for Slade’s wrongdoing? What kind of a G-d would that be? I found some of the dialog sardonic and sarcastic leaving me constantly wondering what the author was really trying to tell the reader. Did some statements act as double entendres meant to make me think more intensely? The history and time line seemed accurate, but did these characters really do the things she attributed to them or were the experiences exaggerated. Was she deriding the history?
There were gruesome details throughout the tale with evil spirits and creatures capable of extreme cruelty. There were hallucinatory moments and scenes in which the characters minds and actions were taken over by malevolent beings. Some of the characters heard voices and suffered madness.
The tale made me wonder if Grover Cleveland possessed such an uneven temperament. Was Woodrow Wilson’s health so precarious? Was Upton Sinclair such a bigot? I could not tell from the narrative what was true and what was fairy tale. Were the traits of these famous personages simply exaggerated to make a point? Was this an excessive use of poetic license?
The author mocks the puritanical views of the times by using the term “unspeakable” to refer to certain events, thereby keeping the reader in the dark because since the events are “unspeakable”, they can’t be revealed. It is an interesting device but it only confused me further. Were there really demons taking possession of some of these characters or were they victims of some kind of mass hysteria? Were there archangels? It was hard to tell who was good and who was evil. Many good characters became evil. Once again, I felt the double meaning was everywhere. It was as if all that we see is never really all that we see!
Using this novel, Oates did expose the cruelty of the times, the religious and racial prejudices of the people, the bigotry and inequality that existed, the duplicity of the socialist movement, the hypocrisy of the church, and the rigid rules governing those admitted to the hallowed halls of prestigious schools. All this, she did, while weaving a Gothic mystery, complete with the often, prevailing misogynistic and superstitious ideas of the times.
Without the gifted prose of this author, the novel would have had no redeeming features for me. In spite of the fact that much of the story went over my head, there were far more times when the use of language and sentence structure was spellbinding and held me fast. I could visualize the characters and the scenes, even when I could not fathom the reason for them.