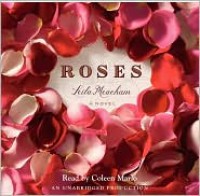 “Roses” is the story of three families and their offspring, over several generations. The lives of the Tolivers, the DuMonts and the Warwicks, are intertwined for years. Even with hard times, two World Wars and a depression, they remained devoted and loyal friends. The Tolivers owned one of the largest cotton plantations; the Warwicks were successful in timber, and the DuMonts owned fashionable clothing establishments. The families had come to America (Texas), from Europe, to make their fortunes, and indeed they did.
Miles Toliver, Percy DuMont and Ollie Warwick were like brothers. Miles had a sister Mary, and both of his friends, Ollie and Percy were smitten with her. She was headstrong, independent and beautiful, and she was totally devoted to the land. Can anyone compete with the Toliver Plantation, Somerset, for her affections?
When her father died, Mary inherited the plantation to the chagrin of her brother and the humiliation of her mother. Her father believed that his wife, Darla, would sell the land and he knew that his son, Miles, had no interest in it. To preserve the plantation, he left it to the only one in the family who would work it and keep it for future generations. This action had life-changing consequences for the family, both destructive and instructive.
Mary worked the plantation, in spite of her family’s wishes that she sell it and divide the proceeds. She loved it too much, and she chose it above everything else, as her father did, when he left it to her, bypassing his wife, making her beholden to her child for her support. Mary knew how much her family was hurt by her father’s actions, but she chose to believe they would come to understand why her father did what he did and would forgive her when she made Somerset successful and paid off all of its debts.
Her brother, Miles, warned her about the Toliver curse. Childbearing was not their strength, and in each successive generation, only one child would ever survive to inherit the land. Mary refused to believe that there was a curse, and although Miles begged her to sell the land and do right by their mother, she loved the farm too much, and she could not do that, or rather, she would not. She had a choice and she made it, ignoring their shame and the anger of her family and judgment of the townspeople. She felt an obligation to fulfill her father’s wishes, to save Somerset and pay off its debts. Throughout her life, she would make prideful, compulsive decisions which would return to haunt her.
As the book developed, there were trials and tribulations, many family secrets were exposed and exacerbated by the often immature behavior of a character. Jumping to quick, emotional, conclusions, rather than well thought out, patient evaluation, often led to errors in judgment and unintended outcomes. There was a common theme of selfishness and excessive pride, recurring through the generations, so that impulsive actions were often followed by long lasting disappointment.
The Toliver women’s major shortcoming, was their excessive love of the land, compelling them to put it before meaningful human relationships. At the end of Mary’s life she regretted her youthful choices. In her will, she, like her father, unintentionally caused great pain with her final wishes. Would the curse be lifted? Would the painful choices help family issues to be finally resolved?
In the story, roses have special significance. A red rose was offered when someone needed to ask for forgiveness; if a white rose was returned, it meant their apology was accepted and they were forgiven; if a pink rose came back, forgiveness was being withheld. These flowers and colors have an important place in the story. There were several major female and male characters. They were well-developed and often infuriating in their behavioral choices, but their number often made it hard to keep them straight. I definitely needed a crib sheet with a family tree.
This is a family saga, complete with all the emotions a family experiences. There were ample examples of sadness, joy, romance, anger, love and hate, success and failure, resentment, pride, immaturity, and even brutal vengeance, but hopefully, in the end, there would be justice coupled with the disappointments. The story is about arrogance, secrets, betrayals and unrequited love. It is written well, although it is a little too long and wordy, sometimes complicated and sometimes hard to follow, requiring a bit of a look back to get the story straight.