A novel about the choices we make and the possibility of going back to change them. 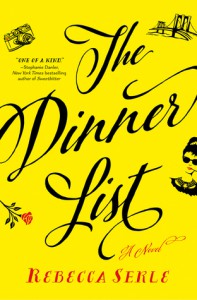 The dinner list, - A Novel, Rebecca Serle, author and narrator

When Sabrina was still a university student at USC, by chance, at a photographic exhibit, she meets a young man from UCLA who is studying photography. For her, it was kismet, but they made no plans to meet again, and he soon disappeared from her life. When, four years later, not in California, but in New York City, she spies him again, their friendship begins in earnest. She is sure it was written into her destiny as their relationship develops and grows stronger. He is working as a photographer, and she works in publishing. Her career is more suited to New York, but California would be better for his future. It is a dilemma. How would it be resolved?

Sabrina had a best friend, Jessica, who was close to her and her mother and was almost like family. They had a birthday ritual. Every year, the girls took each other out to celebrate. The birthday girl chose the restaurant. One time, the two discussed which five people they would invite to their birthday dinner, if they could have anyone. Sabrina’s list was Audrey Hepburn, her father’s favorite movie star, Tobias, the love of her life, Jessica, her friend forever, Robert, her father who had abandoned her and her mother, and Conrad, a former professor who always left her with something to think about.

When Sabrina arrived to meet Jessica for her birthday celebration, there were more seats than she expected at her table. Her five people were actually attending her dinner. She stopped thinking about how and why the guests were there and allowed herself to experience an evening that shouldn’t have been possible.

As the dinner progresses, Conrad is the one who encourages the conversation and Audrey facilitates it. Jessica keeps interjecting with her own opinions which are sometimes contrary to Sabrina’s, and Tobias seems to want to reassert their relationship. Robert reveals the details of his life. The reader discovers that not all of the guests are alive! The dinner conversation delves into their lives and examines their relationships. Love, loss, friendship, grief, disappointment, and need are just some of the emotions that are explored. The conversation allows each guest to relieve their minds of certain burdens.

The story takes on a bittersweet reunion atmosphere. Poor choices are revealed and some of the guests are able to explain the circumstances that changed and influenced her life and theirs, although Sabrina had not known about a lot of the facts that they are exposing. It enlightened her and enriched her life in such a way that she was now able to move forward, where before she had been stuck grieving over past mistakes, losses and things beyond her control.

At times, she had been selfish and at times she had deliberately overlooked things that she should have dealt with that could have solved a problem, Instead, she took the less stressful, easy way out. At times, she was immature and wouldn’t deal with reality because it was painful. As each of the guests faced and revealed their lives by looking back, through memories, at their pain and sorrow, Sabrina realized that she was not alone in her feelings of sadness and pain, there were others who also suffered losses and grief, and dilemmas that were difficult to solve. Although there would only be this one brief dinner to work through all of her questions and doubts about her life and to ponder about any changes she would have or could have made, the conversation was able to enrich her and enable her to move forward.

There was a bit of magical realism in the story, but it was more dreamlike than make-believe. It was simple and easy to read. The characters revealed themselves well as they explained behavior and character traits she had never understood or accepted. The experience allowed Sabrina to say good bye to her past instead of remaining stuck in some part of it. It also allowed the rest of the characters to move on to occupy a space in her life that was more acceptable to both Sabrina and them.

In general, I don’t think authors should read their own books on audios and this one reinforced my belief. The author’s voice lacked the resonance and maturity of a professional and, at times, it was irritating to me because it was almost too matter of fact in its portrayal of the narrative. Still, it was an interesting story with an imaginative plot. It made me wonder, at my stage of life, if there would be five people I would like to revisit with in order to explore our relationship, and it made me wonder if there was anything in my life that I would go back to and change if I could.

What would you do if you could pick five people to have dinner with, living or dead? Who would you pick? If the opportunity really arose, how would you handle yourself? Would you be happy to be with the people or would you unload all your hidden anger and resentment? Would problems get resolved? Would they grow worse? Could you be mature enough to deal with the issues that are suddenly revealed to you that you never knew about, unknown families, resentments, needs? It is an interesting question to ponder. It makes one realize the importance of the choices we make because we carry them with us down the road of life.