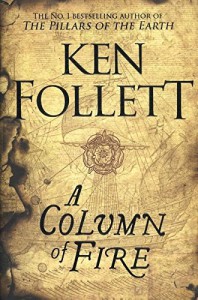 A column of fireA Column of Fire: Ken Follett, author; John Lee, narrator This long and well researched novel about the history of the royal families in Europe, during the latter half of the 16th century, completes Follett’s Kingsbridge trilogy. This book covers half a century, from the middle of the 1560’s to just after 1600. The rivalry existing between royal families, in order to determine the right to the throne, and the brutality committed in the name of religion in Europe, with the Inquisition in full swing during that time, is brought to life with the focus on two fictional families, the Willards who are Protestant and the Fitzgeralds who are Catholics. Of opposite religious faiths, the reader travels with them over the course of their lives as they move in many different directions. Their religious beliefs are truly believed to come from G-d, and these beliefs govern their choices, lifestyle and behavior. Plots to overthrow the English royal family are exposed, and the murder of perceived and actual heretics is evident in the lives of the citizens depending on the country in which they reside. The methods used to interrogate and punish the sinners and traitors are violent and cruel. Each subject remains loyal to his/her monarch and to his/her religious belief, above all. Protestants murder Catholics and Catholics murder Protestants. There are plans and plots to capture and/or murder the opposing royal competition in various countries in order to overthrow one monarch and install another. Few are without sin in that regard. The subjects of the different European royal families, who are often engaged in the plots to overthrow and destroy the political leaders and religious leaders they oppose, believe G-d justifies their behavior. I was disappointed in this third novel of the trilogy because the author seems to have succumbed to the decadent use of crude and vulgar language and sexual description so common today in mass produced books. I found them unnecessary and out of place. I believe they reduced the value of the book and certainly did not enhance it. Still, the book immerses the reader in the lives of Europeans from many countries during the latter half of the 16th century and begins in the same area of Kingsbridge as the previous novels in the series. It continues to travel throughout other European countries as royal conflicts and religious prejudices become the prominent subjects of history. The story takes us through the reign of Mary Tudor and Elizabeth Tudor. It reveals the history of Mary Stuart, the Queen of Scots, whose subjects never gave up plotting to overthrow Elizabeth Tudor, in order to place Mary on the throne of England, as the rightful Queen recognized by the Pope. (Mary was a devout Catholic and Elizabeth was a Protestant who was far more tolerant of other religions, neither believing in the torture of heretics nor in their murder. She believed they could all get along in the world without having to eliminate each other.) As the story progresses, the reader witnesses the constantly changing political and religious scene with all of its concomitant challenges. The battles and intrigue are the best part of the book, with the family rivalries and their opposing beliefs taking a back seat, serving only to move the historical narrative forward. A student of history will know how it will all turn out in the end, but as a novel, it is educational and entertaining. The audio