The book requires the reader's attention. The subject matter is honest, but difficult. 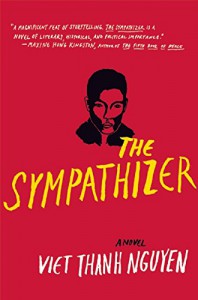 Saigon has fallen. America is abandoning the South Vietnamese. Panic and pandemonium rage as they try to save themselves for they know that the Viet Cong will be brutal in their reign when they take over.  With the suddenness of the evacuation, there are just not enough spaces on the transport planes to take all those who need to leave, and the mounting danger is apparent with the huge crowds gathering at the airport surging toward the planes they cannot board.  The book examines and thoroughly exposes all sides, motivations and personalities of those involved in the Vietnam War.

A Captain in the service of South Vietnam and confidante to the General in charge, The Sympathizer, has drawn up a list of those to be on the last evacuation list, on the last military transport plane leaving Saigon. This is to be arranged by their CIA contact, Claude. The Captain remains unnamed throughout the book. He is a man with two distinct sides and two distinct backgrounds, a man who floats between two worlds never knowing within which world he belongs. He is the product of both an interracial relationship and a forbidden relationship. His mother and father never married. She was a maid and his father was a Catholic priest. The sympathizer was no longer a Catholic. He was an atheist, and his religion was Communism. He referred to himself as a bastard. He worked for the enemy of the army he pretended to support; he was a spy for the Viet Cong. He was the quintessential hypocrite, the typical person who was easily subverted; he was a person who was dissatisfied with his life and ashamed of his background. He was a person always searching for answers to unanswerable questions, a person who saw both sides of the issue but chose to support one ideology over another without fully understanding his choice, the reasons for it, or the consequences.

After the first attempts for his group to fly out of Vietnam were thwarted by enemy fire, his plane finally lifted off and took these last survivors of the past, into the sunset of their future. Although they hoped to return to fight another day, to recapture their country, that remained to be seen. Their war had ended in defeat, in ignominy for both the South Vietnamese and the United States. Neither side fully understood the other, rather each side sought to imprint their culture on its opposite. The Captain who is on the plane with the General, is expected to do his part in America, to keep his allies-the Viet Cong, advised of all the future plans of his “supposed comrades in arms” without getting caught. Betraying his friends and fellow South Vietnamese, he secretly sent information back to his handler, Man, via letters to his “aunt”. When necessary, he worked both sides of the aisle, committing acts of violence or turning a blind eye to the acts of others depending on his own need to protect himself and the cause. He was willing to sacrifice possibly innocent people to protect himself in his service to the communists. In this climate, the common belief was that the injustices being carried out upon the victims were equally employed by both sides, so they were inevitable. Excuses were created to justify their actions, and they performed their duty, no matter how heinous, even when unsure of its validity. If they didn’t do it, someone else would.

The Captain, the General and the others in his party were forced to rely on the charity of others, and thus humbled, were forced to take jobs providing them with no stature, surely not the stature they were used to when they served in the Military. Behind the scenes, the general was actively trying to organize a trained force to return to retake their country. He had convinced some in power in America to help him in this cause both financially and with very limited military might. He believed in America, its democracy and ideals, while the Captain believed in Ho Chi Minh and his teachings. As time passed, although the war was over for them, those who had served their country wanted to continue to serve, those in the armed forces wanted to continue to fight; they simply wanted to feel like men again. In America, they had discovered that they did not know how to be Americans. Their wives had become more independent, often voicing opinions and displeasure. The men do not want to be westernized. They wanted to maintain their eastern culture and ways. They often felt hopeless and humiliated.

The Captain felt responsible for the well-being of only two men, his comrades Man and Bon, who were devoted to the cause of the Viet Cong; the three of them were blood brothers from boyhood. As time passed, though, the sympathizer witnessed and participated in events that haunted him. They made him think about his own behavior and beliefs, but always, he returned to the ideals he had chosen, the ideals he had been taught by his communist friend, Man, the ideals of Marx and Ho Chi Minh. Although he seemed to carry out his orders without emotion, afterwards he often became ill and was disturbed by the ghosts of his victims who visited him in waking hours and dreams.
Throughout the book, many truths become apparent, but one stands out. With all ideologies, when those in power who have been accused of misdeeds are replaced, those who gain the power often become just as, or even more, corrupt and evil. The methods used by the enemy are considered heinous, but when they are actually used on The Sympathizer by his own side, the Viet Cong, he seems bewildered. He doesn’t understand why he is being mistreated so, why he is being punished. He had devoted himself to their cause and was now betrayed by those he had sacrificed his life for, those he had loyally revered and defended. His reeducation began to teach him that perhaps nothing was more important than independence and freedom. His had been taken away.

The Captain realized that he had betrayed others. He had straddled two worlds without fitting into either one. While he worked for the communists, he often sympathized with the plight of his enemies. He was captured and confined, basically for being infected by the Western world he had been sent to by Man. He was beginning to think that education might actually be the enemy of his comrades. Once one learned other ideas, one might believe one should be free to actually think and choose their own ideas, but communism demanded strict adherence and obedience to their set of rules. If one thought freely, one might see the flaws, see the injustice, see the one sided nature of the beliefs they were forced to follow. They might come to understand that rather than encompassing all and helping all, communism actually helped to perpetuate and protect the efforts of those on top, first and foremost, at the expense of the followers, which is true of most dictatorships.

All the while Man was sanctioning the torture of his friend, the captain, he insisted that he was saving him from those who were above him in power, those who had already judged the Captain guilty. He told him he was not truly a prisoner, although he was in an isolation cell to prevent him from contaminating anyone else with western ways. For a year he was forced to write and rewrite his confessions. The commandant did not believe his confessions were authentic and would have summarily disposed of him, were it not for Man who was the commissar. His confessions were meant to cleanse him, perhaps to brainwash him, but did they cleanse him or confuse him further? The confessions were, after all, forced upon him. He began to think that what he had chosen to do was not as just a cause as he had once thought. He began to think it was simply a means to pass the mantle of power to someone else to use. It seemed that someone was always there waiting to assume the authority to rule the people, rather than to share the power to help the people. It was, ultimately, once again used to control them.

As the book moves back and forth in time, the things that shaped the Captain, that turned him into a communist, are revealed. His views of his country and countrymen are exposed. He describes a culture in which the poverty had given birth to a people who would do anything necessary to survive. They would lie, cheat, steal, push, shove, and bully those weaker in order to gain the advantage, an advantage which provided them with little. They were poorly educated and unable to make thoughtful decisions. They had been under the rule of so many governments they had lost the ability to be independent.  They blamed others for their plight, never themselves. To them, America was like a monster devouring everything in its path. The book exposes the flaws of the war and those involved. Each side misinterpreted the other, used the other, because they never took the time to understand each other or their cultures. The Americans looked down upon the Vietnamese and often made promises they could not fulfill. They each sought to do the impossible, to remake the other in their own image and to use each other for their own advantage.

The prose was far and above that in most modern day books. Each sentence was well crafted with metaphors and images that were creative and filled with insights into the characters and their culture.  Every sentence swept the reader away into the life and mind of The Sympathizer and those with whom he interacted.