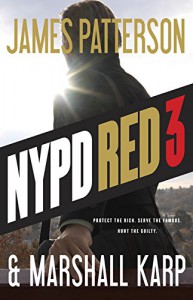 There are three generations of very wealthy Hunter Aldens living in Manhattan. They are just the right kind of family to come under the purview of NYPD Red, a specially trained unit of the police force that specializes in protecting and serving the needs of the wealthiest and best connected families; they are the rich, the famous and very often, those that are most likely to get away with stretching the law to its limits. Hunter Alden is the son of Hutch Alden and Tripp Alden is the son of Hunter. Their fortune comes from Wall Street which doesn’t make them win friends, but surely helps them influence people.

When a headless body turns up that turns out to be Peter, Hunter Alden’s, long time, Haitian driver, who had been on his way to meet the youngest Alden, a criminal investigation ensues which takes the reader on a merry-go-round search for the murderer and the missing head. Although an older, somewhat addle-brained woman has reported a terrorist event which might indicate the possibility that Tripp Alden was abducted with his friend Lonnie, in conjunction with Peter’s murder, she is not a very credible witness and is not believed. Couple her account with Hunter Alden’s insistence that his son was not kidnapped, since he had texted him explaining why he wasn’t home, and it becomes obvious that the police force has their hands tied behind their backs. No investigation into a possible kidnapping can begin alongside the murder investigation because there is no actual proof that it has even occurred.

The merry chase twists and turns steadily until the murder mystery is solved. The investigators are Zach Jordan and his partner Kylie MacDonald, a woman he was involved with romantically a decade before. They follow every lead but come up against road blocks involving pull, protocol and evidence. They cannot seem to prove their theory about Tripp’s kidnapping, but they are pretty positive that the elderly woman who reported the crime got part of it right. She did not see a terrorist attack, she saw two young men being kidnapped by a man dressed in black from head to toe. The investigation twists and turns as they search for evidence of a kidnapping and a killer still large. At one point, there is an odd theory floated about 9/11, that involves Hunter Alden. It, also, seems rather incredible. In this novel, truth is often stranger than fiction.

The novel included some humor, often dark, and presented police work as bogged down by rules and regulations that protected the guilty and hogtied the police, preventing them from doing their job. In some cases, the police were portrayed as bumbling idiots, but for the most part, they were trying to do their job without being accused of impeding rather than serving justice. The implication seemed to be that politics was a major factor in how hard the police would be allowed to investigate a case when it involved well-connected, wealthy victims. The wealthy were in control, able to call many of the shots because their money provided them with influence and power.

The women in the book were portrayed as strong, but very arrogant and authoritarian. The men were portrayed as thinking with their small brains more often than not, making impetuous decisions that often proved fatal to their purpose, while the women’s impetuous decisions were more often successful and praiseworthy. It seemed as if the women were the stronger sex and were more in control, in this novel, anyway.

The romantic episodes throughout the story seemed unnecessary. The actual plot seemed implausible. However, this is a good beach read, plane ride read, vacation read. It will not tax the brain but will entertain for sure. The action is steady, the tension builds, and the reader will stay involved until it ends, with the moral of the story being that justice is not necessarily the end-all, be-all best conclusion, in some cases, and the Mounties always get their man!