Today Beryl would have been praised and considered a thoroughly modern woman! 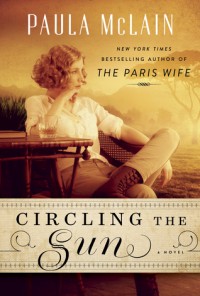 Circling the Sun, Paula McLain, read by Katharine McEwan
This beautifully imagined and poignantly read work of historic fiction, about Beryl Markham, born in 1902, brings this remarkable woman to life . Written with a lyrical prose, representative of the way novels used to be, with beautifully constructed and descriptive sentences, the author utilizes a vocabulary that is perfectly expressive for the imagery desired.
Known perhaps too well for her promiscuity, Beryl Markham’s accomplishments and versatility faded to the background. She was indeed a self-made woman in a time when women were expected to know their place in the class oriented world of the British, and she often defied the rules. As a child, she was brought to Kenya, a place she grew to love and respect. It’s beauty is well described by the author. At the tender age of four, she was abandoned by her mom who was unable to withstand the hardships of life in Kenya. She returned to England, taking only her son, leaving her daughter, Beryl, behind. She remained with her father, was raised with local children and ran free for several years without the influence of a woman in her life. She grew up without the knowledge a young girl would have normally been taught, like the art of conversation and the art of maintaining a home. She, instead, was fiercely independent, very capable and not very feminine.
Beryl took from life what she wanted and although she often regretted her behavior, or at least in the novel she was given to some remorse for her many betrayals of others, she never did seem to learn from her mistakes. Too often, she repeated them, and while I found her to be a compelling person, willing and eager to take risks and blaze trails, I also found her to be immature. She did not seem to grow up, until at the tender age of about 30, tragedy struck her profoundly.
Beryl had several romantic interludes and several unhappy relationships. She had one true love but he was already taken. When she married, shortly before her 17th birthday, she had no idea what she was getting into, and only decided on marriage as a way out of her dilemma when her father told her their farm was failing, and he was moving to Cape Town. She was completely unprepared to be a wife, and although she tried to be a dutiful one, the marriage was difficult and she was soon unfaithful. I found it odd that someone so young and naive would have engaged in a love affair. I began to wonder about which part of the story was history and which was fiction. At any rate, when her husband discovered her infidelity, he eventually horrified and humiliated her by chastising her in public which served only to help spread her wanton reputation further.
She married again, a few years later, into the world of class and wealth, but it too was unsuccessful. She eventually even married a third time.
A talented woman of fierce spirit, Beryl achieved much in her life at a time when little opportunity presented itself to women. Her friends ranged from royalty to the local children she grew up with and played. She was nothing, if not versatile and open minded. She became the first woman to obtain a horse trainer’s license, which she accomplished before the age of 20. She became the first person and first woman to fly alone across the ocean from London to America, in 1936, when barely 35. She achieved some notoriety as a writer when her authorship was questioned.
I thought at times that the book concentrated too heavily on her romantic interludes and unfaithful episodes, which tended to diminish her accomplishments and make her less likable, although the author did present her in a sympathetic light.
The book begins in flight and ends in flight, and while It covers only about a decade in Beryl’s life, she accomplished more in that decade than many women do in a lifetime.